The idea of a run around borders of Zielona Góra city has been for years in our heads. However, the catalyst was missing …

Zielona Góra recently increased significantly its borders by joining neighboring areas. We were curious, how long would be the route around it – turned out that more than 100 km. It is therefore a great opportunity to organize in our city an ultramarathon on a 100+ km distance, following just the new borders of the city.

Ultramarathon “Nowe Granice” (which in Polish means both: new borders and new limits) is not directed only to the ultra runners. In the course, in addition to the individual participants running the whole distance, allowed are 2 and 4 person relays as well as duathlon for individual races and 2 person relay. We hope that this approach will allow many of you to participate in the competition and at the same time get a taste of the ultra racing.

Let everyone set for himself his own new limits. 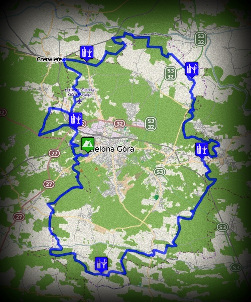